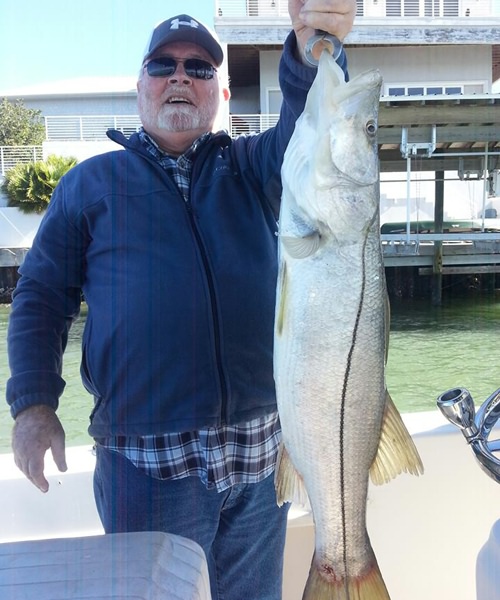 Snook (Centropomus Undecimalis) is probably the second most commonly targeted fish found inshore in Florida after Redfish. Snook is a very popular inshore game fish because of its renowned fighting ability. It is also very good to eat! The further south you go in Florida, the more common Snook become. That’s because Snook are actually a tropical fish very common in Central America. The Daytona Beach area is at the northern limits of the Snook range.

There are five species of snook found in Florida but only the Common Snook is found as far north as Daytona Beach. Snook also has several different names incluing Robalo and Linesider. The word “snook” comes from the Dutch word “snoek,” which in English means pike, probably because of its physical resemblance to the northern gamefish.

The harvest of Snook is seasonal. Here are the latest Snook fishing regulations for Florida.

Where are Snook Found?
Common Snook, the only one of the five Florida species of Snook found as far north as Daytona Beach, are associated with freshwater sources. They are found in the brackish water estuaries around Daytona Beach including the brackish waters of the Halifax River and the Intracoastal Water. However young Snook are found in waters that have minimal salinity and are known to share habitats with freshwater Largemouth Bass. The smaller, young Snook can be found in mangrove lined marshes all the way upstream to freshwater rivers and creeks. These young Snook remain in this habitat until they are about ten to fourteen inches long. At this size they begin to sexually mature and migrate toward the higher salinity areas such as down the Halifax River and closer to Ponce Inlet and the Atlantic Ocean. The mouths of coastal rivers and major ocean inlets such as Ponce Inlet near Daytona Beach are prime Snook spawning locations. Snook spawning occurs in Florida from April or May through September or October, depending on water temperatures.

As long as the winters are mild in the Daytona Beach area, Common Snook will continue to thrive in the area.
When the occasional freeze hits the Daytona Beach area, there may be a diminishing of the local Snook population. Cold weather will make the Snook inactive so look to warm weather fishing if you want to catch Snook on your next Daytona Beach fishing charter. Captain John of Floating Time Charters has decades of experience with local species, including Snook, and can advise you of the best time to go fishing for Snook around Daytona Beach.

Snook Size
The Common Snook is the largest of the five Snook species found in Florida. At about 10 to 14 inches in length, the young Snook leave the upper, lower salinity estuaries and head to the lower level, higher salinity estuaries nearer the Atlantic Ocean. The larger Snook can be caught near Ponce Inlet and New Smyrna Beach, just south of Daytona Beach, and a common fishing location for Daytona Beach fishing guides like Captain John Schmidt.

The average snook that you’ll catch on a Daytona Beach fishing charter will be about 2-5 pounds. However much larger Snook in the 10 – 20 pound range are not uncommon, especially near Ponce Inlet during the summer spawning season. The Florida state record for a Snook is 44 lbs, 3 oz. and was caught near Fort Myers.

Captain John Knows His Fish!
So when you’re ready to do some great inshore fishing in the rich coastal estuaries of Daytona Beach, go fishing with a genuine local fisherman who knows the waters like his own backyard!

Captain John is a second generation commercial fisherman who has been fishing the Daytona Beach waters his entire life. He is ready to share his knowledge and experience of local waters with anglers who want to experience the best inshore saltwater fishing in Central Florida!