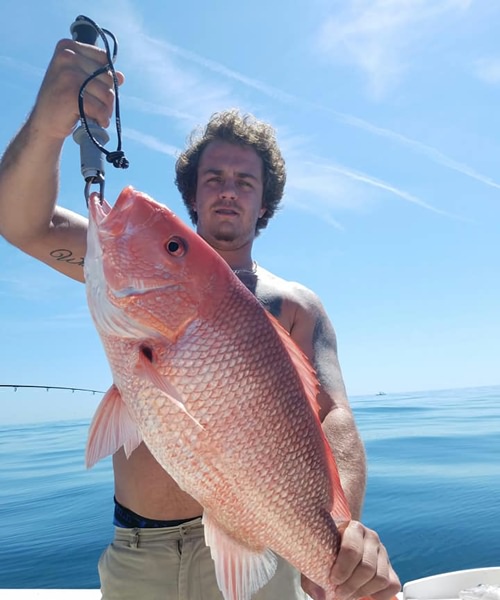 Fishing for Snapper in Daytona Beach
Snapper are the most sought after and frequently caught family of fish caught on Daytona Beach offshore fishing trips. Snapper are bottom dwellers commonly found in large schools around the many artificial reefs and wrecks off the coast of Volusia County which includes Daytona Beach, New Smyrna Beach, Ormond Beach and Ponce Inlet. Schools of snapper are usually made up of fish of very similar size. The artificial reefs of Volusia County, with their schools of snapper, are easily accessible on half day, four hour offshore fishing charters near Daytona Beach. These reefs are also home to Amberjacks, Cobia, Triggerfish, Black Sea Bass, Hogfish, Tilefish and many varieties of Grouper. The reefs are the favorite destination of most Daytona Beach offshore fishing charters.

All snappers have a similar appearance including a sloped profile, a laterally compressed body. medium-to-large scales and a spiny dorsal fin. There are many different species of snapper found near Daytona Beach. They vary in color from dark gray to bright red but different snapper species can still be confused with others. Captain John of Floating Time Charters knows these different snapper species and will make sure that all state and federal regulations regarding fishing for snapper are followed. 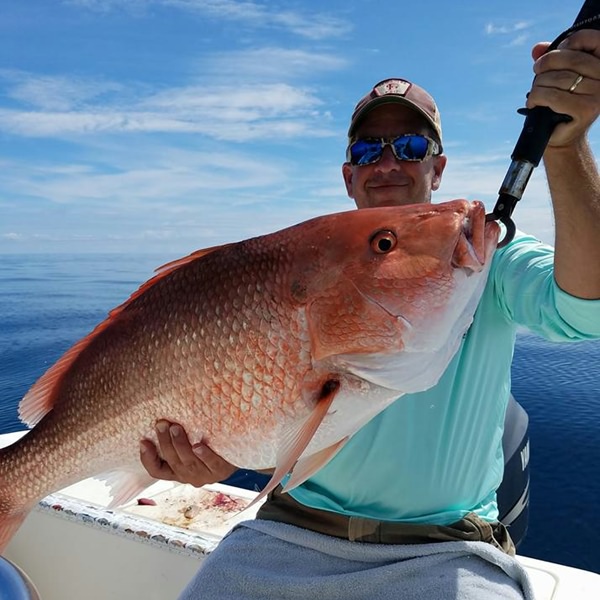 There are many species of snapper found in the offshore waters near Daytona Beach. Below are some of the most common snappers you may encounter while bottom fishing on your next Daytona Beach offshore fishing charter. 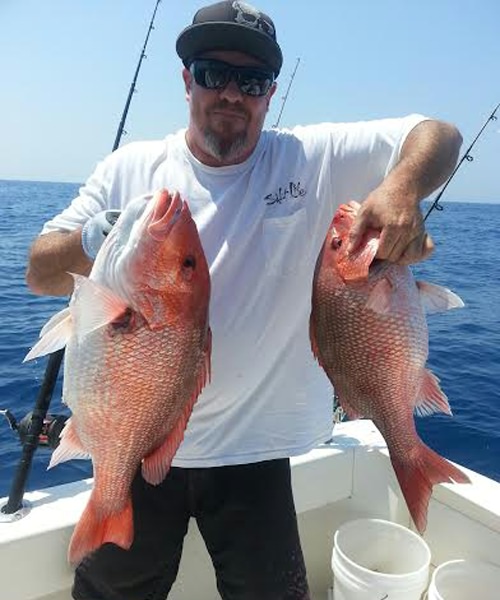 Red Snapper are the best known of all the snapper species caught in Daytona Beach. Red snapper are a commercially important species and much sought after as a game fish. They are considered by many to be the most tasty of all snappers. The red snapper is native to the western Atlantic Ocean including the Gulf of Mexico. They are commonly found along the southeastern Atlantic coast of the United States and much less commonly found northward as far as Massachusetts.

Red Snapper are commonly caught while bottom fishing near Daytona Beach, especially over the many artificial reefs in the area. They stay relatively close to the bottom, and inhabit rocky bottoms, ledges, ridges and wrecks as well as natural and artificial reefs. Red snapper feed on crustaceans and fish. They commonly inhabit waters from 30 – 200 feet deep but can sometimes be caught in water as deep as 300 feet. 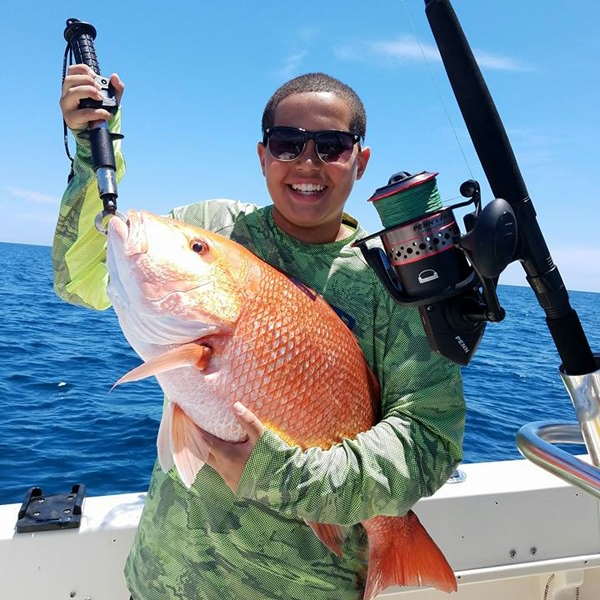 Description:
• Reddish color over entire body
• A series of short, irregular lines on its sides
• Diagonal blue lines formed by spots on the scales above the lateral line sometimes with yellow streaks below the lateral line
• Large canine teeth absent
• Orientation of mouth and eye give it the appearance of looking upward
• No dark lateral spot

The vermilion snapper is a tasty fish often sold as red snapper. Vermilion snapper are native to the western Atlantic Ocean from North Carolina to Bermuda including the Gulf of Mexico and the Caribbean Sea to Brazil. They can be found in large schools offshore at mid-depths over rocky reefs including the many artificial reefs near Daytona Beach. Vermilion Snapper inhabit waters from 130 to 980 ft deep although they are rarely found below 300 ft. They feed on small, swimming crustaceans and mollusks.

The vermilion snapper is not currently eligible for a Florida state record but they can reach a length of 24 inches and 6 to 7 pounds. 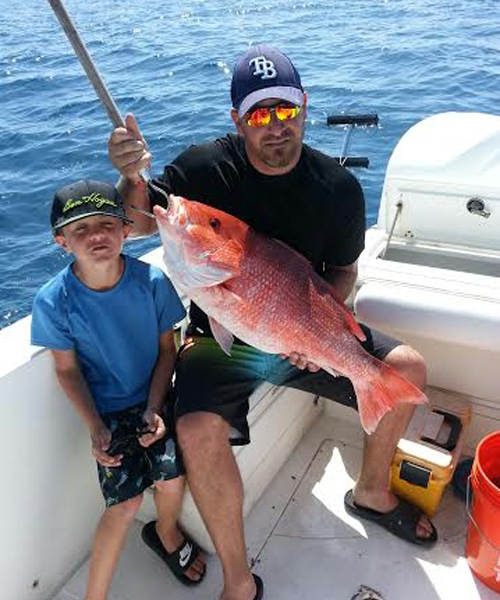 Description:
• Dark brown or gray with reddish or orange spots in rows along the sides
• A dark horizontal band from snout through eye is present in young only
• Two conspicuous canine teeth are present at front of upper jaw
• Dorsal fins have dark or reddish borders
No dark spot is present on side underneath dorsal fin

The mangrove snapper is one of the most common species of snapper caught in the Daytona Beach area. Mangrove snapper are very desirable for their light and flaky flesh.

The Florida State record for a Mangrove (Gray) Snapper is 17 pounds caught near Port Canaveral just south of Daytona Beach.

Description:
• Silvery-pink to reddish in color with short, irregular pink and yellow lines on its sides
• Diffuse black spot, about as large as the eye
• The dorsal fin centered above the lateral line
• Blackish outer margin of caudal fin blackish

The lane snapper is native to the western Atlantic Ocean from North Carolina to southern Brazil, including the Gulf of Mexico and the Caribbean Sea. Like other species of snappers, it is prized for its tasty, white meat.

The lane snapper is a bottom feeder and eats crustaceans, mollusks and smaller fish. Like Mangrove snapper, juvenile lane snapper are found inshore, usually over grass beds or over shallow reefs nearshore. Adults are typically found offshore such as around the artificial reefs off the coast of Daytona Beach. Lane snapper live in waters between 20 to 1,300 feet deep although they are usually found in waters that are less than 230 feet deep. Like mangrove snapper, lane snapper are more typically caught in shallower waters (between 20-60 feet deep) than most other snapper species.

The lane snapper is one of the smaller species of snapper. It can reach a length of 24 inches and 7 pounds but most reach about 10 inches in length.

The Florida State Record for a lane snapper is 6 lb 6 oz, caught near Pensacola.

Yellowtail snappers are one of the most beautiful of the snappers and are often found in large saltwater aquariums. Like most snappers, yellowtail snappers are a tasty fish that is a commercially important species and has even been aquafarmed. The yellowtail snapper is native to the western Atlantic Ocean including the Gulf of Mexico and the Caribbean Sea. Although they have been found as far north as Massachusetts, their normal range is along the Florida coast to the West Indies.

The Florida State Record for a yellowtail snapper is 8 lbs 9 oz, caught near Fort Myers.

Description:
• Dark brown or gray in color, may have a reddish tinge
• Broad-based triangular tooth patch on roof of mouth without a posterior extension
• Despite its specific name, which translates to “blue-fin,” the fins have only a slight tinge of blue
• Canine teeth in both jaws very strong
• One pair of canines are enlarged and visible even when the mouth is closed

Cubera snapper are, like most snappers, a tasty fish. Because of their impressive size and good taste, they are a sought after game fish and commercially important. The cubera snapper is native to the western Atlantic Ocean from Nova Scotia to Brazil, although it is seldom found north of Florida. Cubera snapper can be found at depths from 60 to 180 feet where they feed on fish and large crustaceans.

The Florida State Record for a cubera snapper is 116 lbs, caught near Clearwater.